Crisis is an Opportunity (AlwaysOn VentureSummit)

Posted by The Riskmaster at 9:06 PM No comments:


Posted by The Riskmaster at 8:50 PM No comments:

Eternal Optimism at the OnMedia Conference

Eternal Optimism
Posted by The Riskmaster at 8:13 AM No comments:

Article, "Gone but not lost: The glory days may be over for private equity and venture capital investors. But that doesn’t mean the industry is a done deal" by Rachel Farrell

Posted by The Riskmaster at 9:11 AM No comments:

1. They run out of money. Usually, they are too optimistic about when their product is going to be accepted by the market.

2. Founders don’t have complete faith in each other. They fight instead of delegate, trust and verify with each other.

3. CEO hires weak team members. Strong CEOs sometimes try to carry everyone with them rather than hiring people who stand up on their own.

4. They want to do too much. Usually, a successful start up figures out a narrow niche that they can dominate and then expands from there.

5. They go after too small a market.

6. They don’t charge enough from their customers to survive. These often think their vcs are their customers, and think that a nice sale is all they need to make to get more money.

7. They hire too many people up front. Too many mouths to feed too early can sink a company. Keep a low burn until you have your business model in place.

9. They don’t work hard enough or fast enough or smart enough. All those little decisions add up to an outcome. Awareness of the subtleties of their market dynamics, etc.

10. They don’t take enough risks. Some start-up entrepreneurs think that they should operate as though they are big companies. This is wrong. They will never beat Microsoft or Google at their own game. They must get creative and do things differently, even at the risk of embarrassment.

Posted by The Riskmaster at 4:36 PM No comments: 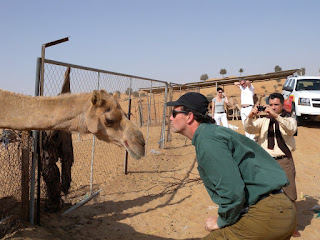 The camel tried to kiss me and then was bowing to me.
Posted by The Riskmaster at 1:29 PM 1 comment:

- The level of engagement in state politics and government by Silicon Valley and its leaders. is it on the rise? the decline? Why?

Well, Government spending as a percentage of GNP continues to rise as GNP growth falls. Silicon Valley is full of entrepreneurs that identify problems and solve them in a variety of ways. I think the Silicon Valley has recognized a big problem in government, which to some represents an opportunity for change.

- we're seeing more candidates for statewide office from Silicon Valley.
Is there an explanation for that that goes beyond the interests of the individuals who are running?

Yes. I think government is broken for entrepreneurs and venture capitalists. Sarbanes Oxley costs a fortune, so great growth companies can't afford to go public. FAS 157 forces mark to market for venture capitalists, who then have to report short term pricing on long term assets, so the investors get scared away. 409A makes it so that companies have to report income for stock options. All of these regulations were written for very large companies. Small business creates all the net new jobs in our country and they are being strangled out of existence by regulators who are focused on big businesses.

Silicon Valley, the greatest source in the world for innovation, the pride of the American Dream is being threatened, and the people of Silicon Valley know it either explicitly or viscerally. Some of the best of them are trying to do something about it.

Has that led to more interest in state issues in Silicon Valley?

Yes. State and Federal. I personally don't know why California has to add more regulation on top of the already burdensome federal regulations, but they do.

Or more political competition within the valley?

I think people of the Silicon Valley all know something is wrong with government, but they don't all know how to fix it.

- on what state policy areas are we seeing the most engagement from Silicon Valley?

Education is a big one. K-12 costs us a fortune and the biggest state ranks somewhere between 47th and dead last in math and science. We are supposed to be the technology capital. Another one is H-1B Visas. I think anyone who comes to the US and gets a master's degree in science or business should get an immediate work visa. The idea that California educates the best and the brightest from all over the world and then, when they are finally productive, deports them so they can't build the next Google here is ludicrous. Environmental issues are a third one.

People in Silicon Valley don't want to be in a situation where they run out of energy. So they are looking for alternatives. It is no surprise that the Tesla didn't come out of Detroit, but came out of the Silicon Valley. At Draper Fisher Jurvetson, we have gone after the environmental problem through the funding of start ups. BrightSource uses solar thermal technology and may be driving enormous energy supply for Californians. I personally think the environmentalists should be chanting, "more nukes." Nuclear power is proven to be cleaner, cheaper, cooler and lower in greenhouse gases than most alternatives, and it can actually make a dent in our fossil fuel use. Solar, Wind, Thermal, etc.

all add up to less than one percent of our energy use.

education? workforce development? environment and energy? Are there areas where we should be seeing more engagement? (I wonder about transportation and infrastructure; the University of California and the education of engineers; wage and hour rules; and tort reform).

Tort reform really needs to take place. Loser pays would really work better. It would keep deviant lawyers from launching low risk, high return lawsuits at businesses. I also think that class action lawsuits should have to be agreed to by a majority of the class who wants to sue before they can be launched. Right now, one shareholder with one share can make a great living suing every company he wants.

- what ideas, if any, do you have for connecting Silicon Valley and Sacramento in a more productive way?
This sounds like dangerous socialist thinking.

How do you get folks in SV interested and engaged in state affairs, when they're so busy with their companies?

They only get interested when the government is failing or messing with their lives. As it is now. Otherwise they would naturally deem it to be unproductive time.

- we saw some major SV companies take a strong stand against Prop 8.
Does that experience suggest a path to greater engagement?

No, I think people in the Silicon Valley don't want the government to determine their lifestyle.

-is the current infrastructure of engagement in the valley -- i'm thinking of technet, slvg -- enough?
For the revolution we need? Probably not. If it is just there to work around the edges, it is too much.

Overall, I'm interested in these questions because of frustration: here you have the state of California facing crisis on several fronts, and a profound need for innovative solutions. And the most creative, innovative part of the state does not seem as engaged as it might be in coming up with solutions. (Of course, the same could be of many other areas and industries in California).

Yes. With the economy taking a hit, people are focused on their businesses as they should be. I have suggested a number of cost saving alternatives to the Governor. I hope he implements them.

Posted by The Riskmaster at 9:52 PM 2 comments:

Interview with Reena Jadhav, CEO nuResume, where we discuss impact of the current economic crisis on venture backed companies. Bottom line: this is a crisis you can take advantage of and an opportunity to grab huge markets!

I think President Obama is brilliant, and we need a smart confident leader, so I am 100% behind him. I can only hope that this limitation curtails government spending, because the best businesspeople might not take the money.

Government spending as a % of GNP has grown steadily from 7% to 40% over the last century. In the same period, GNP growth has shrunk from an average of about 8% to about 2% (and now negative). These two numbers are highly correlated.

I think government pay increases should be tied to GNP growth (not CPI). They would then all have the right incentives.

The "slippery slope" is that Congress is not cognizant of what all the "spend and control" politics does to the business world. It creates a culture of need rather than a culture of opportunity and attracts the worst, most needy businesses. It makes the best businesses, who thrive in a culture of opportunity leave our country for Singapore or China or wherever. Governments are in competition for the great minds and the capital of the world. If the US Government doesn't perform, the best of us will leave for the free-market countries.
Posted by The Riskmaster at 12:51 PM No comments:

I went to a heady event in Washington last night. Great fun.

I met Barbara Walters and told her that my daughter, Jesse was the “Valley Girl” and asked if she had any advice for her. She said, “It is all about the second question.”

I asked Warren Buffett what he thought the government should do about the economy if anything, and he said, “They should try everything and see what sticks.” Then he said, “We are going to get through this.” Good news.

I also met Our First Lady, Michelle Obama for the first time, who is charming and stunning in person. I suggested that she go out shopping with her daughters for a press event to get people buying things and getting this economy moving again, and she said, “Great idea. Go tell Barack—go tell the President that.” So I did. He looked across at her and smiled. I think we have a great President.

The brilliant and thoughtful Jeb Bush mentioned that he reads this blog, and has been doing some consulting since leaving office. Maybe time for DFJ to have a Florida Network Partner….

Michael Dell wouldn’t tell me if he was going to compete with Apple’s iPhone. I think a lower priced compatible DellPhone would take the world by storm.

I told the beautiful Sarah Palin that I love Alaska and that they have to fix the fire alarm in the only hotel in Juneau because it went off every time I stayed there, and she said, “We do that so the tourists can fully experience the Alaskan winter.” Still a great sense of humor.

Here is a report on the evening by a real reporter:
http://www.mlive.com/us-politics/index.ssf/2009/01/obama_rocks_the_alfalfa_club.html

I also met several “Washington insiders.” My conclusion there: I think our capital should move out of DC. The people there are too insulated from their country. They become a cancer for the people who come to Washington trying to make a difference. Not many of them made any real connection between our business environment and our economy. Even my limo driver there was trying to get more money out of government, not realizing where that money was actually coming from. The NYC drivers know.
Posted by The Riskmaster at 9:51 PM 1 comment:

Dinner with Robin Li from Baidu